The December column is always my favorite because I get to look back at my favorite reads from the year.

2015 saw the third book in the Duke City series by Max Austin released in June. DUKE CITY DESPERADO was a fun frolic through the misadventures of Dylan James and his buddy Doc who tried to rob a bank through the drive-up window.

Yeah, most of us would see the folly in this right from the

start but Doc, well, his perspective was skewed. It comes as no surprse that Doc was immediately captured but Dylan manages to stay about a half-step away from the law through a crazy set of circumstances that only Max Austin can deliver.

Each book in the series stands alone with one common element: Alburburque, New Mexico. If you like crime from a slightly tweeked angle you’ve got to give the Duke City series a go.

The Jamie Sinclair series by Nichole Christoff is a hit for me. The debut

was THE KILL LIST where Jamie and the baggage she calls “ex-husband” try to rescue his three-year-old daughter from kidnappers. In the course of her investigation she meets her love interest Adam Barrett who feeds stray dogs. Ladies, can I get a collective *sigh* on this?

THE KILL BOX dives into Adam’s past when he returns

home unexpectedly and Jamie is hired by his grandmother to investigate his bizarre behavior.

Tightly written, with great insight to military life, Christoff delivers a fast-paced series for the romantic suspense crowd. I definitely recommend you grab all three.

Another series that grabbed me was the urban fantasy series HIDDEN by Colleen Vanderlinden. I stumbled onto the books from a free give-away on FB and didn’t stop reading until the last book.

The first book, LOST GIRL, introduces us to Molly Brooks, a telepathic vigilante with a passion for finding lost girls.

Fast paced, funny and heartwrenching this series delivers a host of fascinating supernatural characters in a highly imaginative world.

From the first page to the last this series is gold. I haven’t delved into Ms. Vanderlinden’s other series but they are certainly on my TBR pile.

UP FROM THE GRAVE was the exit in the Night Huntress series by Jeaniene Frost. I enjoyed the strong willed vampire killing Kat and her teacher/husband Bones escapades and all the characters from that world, many have found series of their own.

While this wasn’t the best book in the series it is still a must read once you’ve dived into the tale and I do recommend that you enter their world.

The paranormal adventure BRONZE FOX by Diana Green was a delight. Tobias is a fox-shifter and Etty a street-wise ball of fire are teamed up in an adventure that is part Stargate, part steampunk and all adventure. Author of the Dragon Clan series, Ms. Green has written a wonderful tale. The only complaint I had was that I would have like the romance to take a little longer, I was enjoying the dance. BTW, Ms. Green also designed the gorgeous cover.

This year saw the final installment in the Unknown Assassin series by Allen Zadoff. The first book I AM THE WEAPON introduced us to Boy Nobody. Taken at an early age and transformed into a teenage assassin, Boy Nobody was always the new kid in school, becoming who ever he needed to in order to get the job done. All went well until he started asking questions.

I loved the series and the final book, I AM THE TRAITOR gave a satisfying

ending to these fast paced and intriguing books. This award winning series has been translated into over a dozen languages and has been optioned by Sony Pictures. Great for teens and adults. 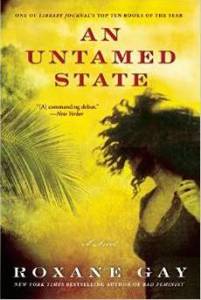 Roxane Gay delivers the powerful tale of Mireille Duval Jameson in AN UNTAMED STATE. While visiting family in Haiti Mireille was ripped from her fairy tale life and held for ransom. Knowing her father would never pay, this strong-willed woman fought to survive the horrific abuses inflicted on her by her captors.

The true power of this story comes in the second half of the book, after Mireille has been released by the kidnappers. Her journey back from the trauma was something I could not stop reading.

I requested a review copy of this book because Barney Teegarden just seemed like the kind of guy whose company I would enjoy. I was right. COMING BACK by John Inman was a wonderful tale of people who look out for each other with tenderness and humor. I look forward to grabbing the first two books in this series.

This last book in my list of 2015 favorites is THE SOUND OF GLASS by New York bestselling author Karen White.

The generational effects of domestic violence are at the heart of this story. The story opens with a tragic plane crash in 1955 near the home of Edith Heyward in Beauford, South Carolina that deposits a suitcase in Edith’s yard and leaves the reader with a mystery.

Fast forward to 2014, Merritt Heyward loses her firefighter husband but inherits his family home in Beaufort where she meets the brother-in-law she didn’t know she had. Arriving in Beaufort on Merritt’s heel is her too-young stepmother, Loralee, and her half brother, Owen.

White brilliantly guides us through the awkward interactions of four people who seemingly have little in common as they grow to become a family. Rich details, compelling characters and numerous secrets keep you engaged until the last page. I loved this book.

Donna writes the review column The Eclectic Express for the Book Breeze.